At the beginning of the 20th century, many Russian poets, artists, directors and composers were in a state of feverish search. They were experimented, looking for new forms and new ways to express themselves. Among such brave experimenters was Aristarkh Vasilievich Lentulov - one of the brightest figures of the Moscow association “Jack of Diamonds.”
The members of “Jack of Diamonds” made their voice heard in 1910.
Aristarkh Lentulov was from Penza province, where he was born to a family of a rural priest, went to Petersburg, and from there in 1910 moved to Moscow and never left him again.
However, for a very short time he studied and worked in the workshop of the cubist Henri le Fauconnier in Paris. Lentulov became interested in cubism and futurism. However, in many of his works there is a lot of native Russian.
Paintings “Children in the Garden” and “Landscape with Trees” were created in 1918 on a canvas by oil technique. On these canvases we see small geometric shapes that make up the composition and give an image of a real scene.
One of the favorite themes of the artist is old Russian architecture.
In the 1920s, he returned to architectural motifs, most often creating landscapes of Zagorsk, and later - of Moscow.
His work “A Shed. Zagorsk,” painted in 1922, is a gift from the artist’s daughter Marianna Lentulova to Professor Aram Abrahamyan, whose collection you have the pleasure to see in our museum.
Paintings “Port” and “Nizhny Novgorod. The Kremlin” are Lentulov’s early works and date back to 1909 and 1911 respectively. In the painting “Port” the impact of neo-primitivism is noticeable. This is a naive story about what is happening on the seashore and on the water. In “Nizhny Novgorod” the Kremlin is represented - the central part of ancient Russian cities.
А. V. Lentulov at the Museum of Russian Art (Prof. A. Abrahamyan’s collection):
“Port”, 1909
“Nizhny Novgorod. The Kremlin”, 1911
“Landscape with Trees”,1918
“Children in the Garden”,1918
“A Shed. Zagorsk”, 1922
“Yalta” 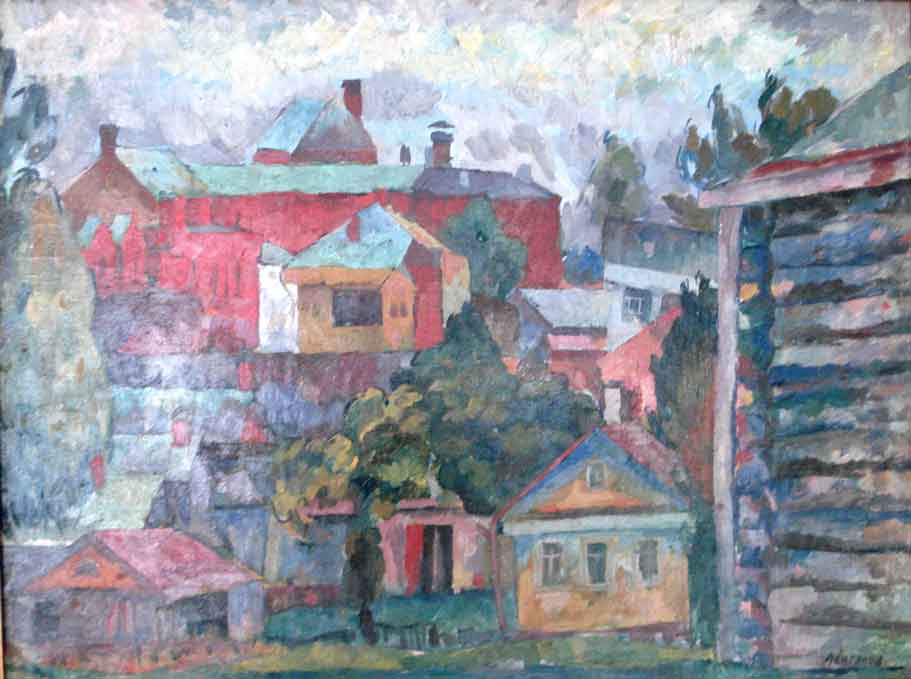 Children in the Garden 1918