Nikolai Sapunov lived a short life. But this short life was strained to the limit. He was born in December 1880 in Zamoskvorechye to a poor merchant family. His talent manifested itself early. At the age of 13 he entered the Moscow School of Painting, Sculpture and Architecture. He studied under Isaac Levitan and Konstantin Korovin, who worked in the genre of still life a lot in the 1900s and loved to paint flowers, especially roses. Interest in this genre arose with Sapunov under the influence of Korovin. During the same years, he painted many still lifes of roses. Actually, still lifes with flowers occupy an important place in Sapunov’s work. He loved them as a child in the greenhouse of his parents’ house. Nikolai Sapunov’s worldview began to form very early as a symbolic one. It was not by chance that he was the creator of the image of a blue rose, which became a symbol of the exhibition of the same name in 1907 and a sign of the symbolic movement in Russian art.
“Carousel” is the main theme of Nikolai Sapunov’s work. The artist created several versions of the “Carousel,” one of which is stored in our museum. For Sapunov, the carousel is not only a decorative image and a sample of everyday Russian architecture, which reflects folk tastes, but also a symbol of eternal circling of life - a life that is noisy, beautiful and seemingly hilarious cheerful, but in fact has a sense of tragic destiny. Above the artist, as «Damocles sword», hung a terrible prophecy of a fortune teller, in 1902 in Italy predicted his early tragic death.
The fortuneteller or “woman with an evil eye” is depicted in the center of the composition. And it is no accident that one of her eyes is crossed out by a vertical line of the carousel fastening. Equally important in the composition are wooden horses, which carry on themselves a blurred figure of the artist. The painting is decorative and looks like a carpet shining with all colors. And the colors sound. And this painting is akin to expressive bravura music, which is astonishing in its depth and intensity.
And the fortuneteller’s prophecy came true. In the summer of 1912, Sapunov drowned in the Gulf of Finland. So in the 31st year, the life of one of the most talented Russian artists of the Silver Age was tragically cut short.
N. N. Sapunov at the Museum of Russian Art (collection of Prof. A. Abrahamyan):
“Nocturnal Festivity”, 1907
“Merry - go - round”, 1908 Varian of the eponymous pictures of 1908 (STG, SRM)
Sketch for stage desigh for A. Shnizler’s Dumb show “Columbina’s Scarf”,  1910
“Hydrangea”,1910
“Roses”
“Tea – party” 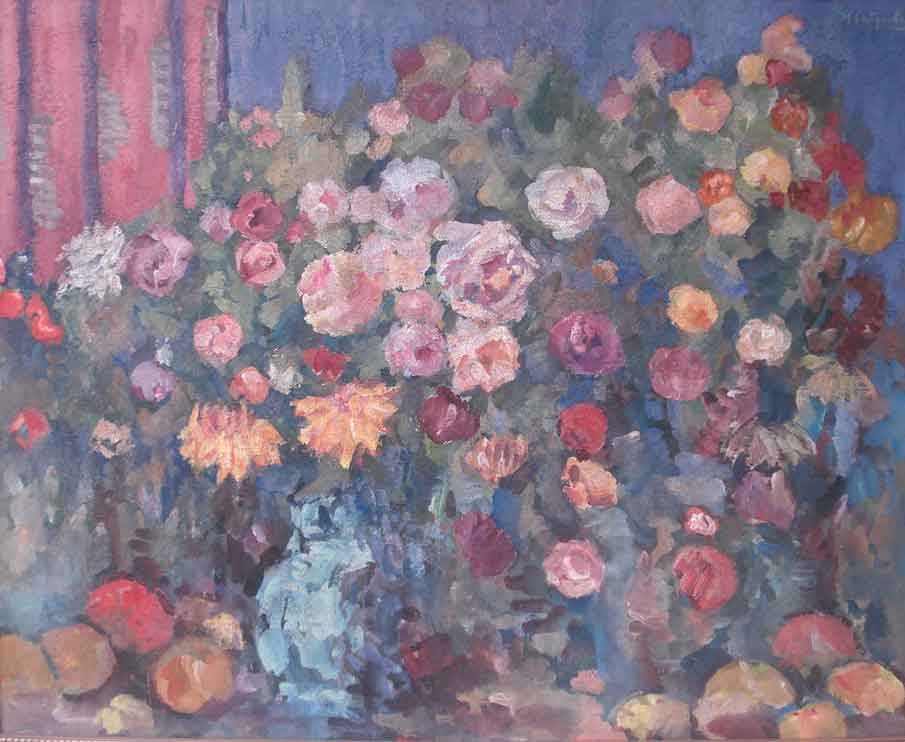